Tsukumo is one of Akihabara’s largest computer retailers. They have been in business for over 20 years and now have several shops located around the neighbourhood. The Tsukumo Akihabara Headquarters are actually 3 different buildings which are located adjacent to each other and named Headquarters I, II and III. By combining them all, they form a massive 10 floor building with thousands of computer related items being sold. Definitely, this is one of the most interesting places to visit in Akihabara for computer enthusiasts.

The product range sold in each of the three headquarters varies greatly from one to the other, so it’s best to take a look at what each of them has to offer when planning a visit.

The first Tsukumo Headquarters entrance is located on the smaller alley, around the corner if you come from the Headquarters II or II, just in front of the Star Kebab Takeaway stall. It’s the biggest of the three, with a total a total of 6 floors, and it’s entirely dedicated to general consumer oriented computers and computer accessories. Their product lineup is the following:

The second Tsukumo Akihabara Headquarters office is the second largest shop of the three and it’s focused on selling more specific and professional products than the other two. It’s located just next to PC Useful’s shop and features four floors distributed as follows:

The third Tsukumo Akihabara Headquartes is the smallest shop of the three, located just next to the second one. It’s also the most recent one and it’s entirely dedicated to the newer Virtual Reality gadgets: HTC VIVE and Oculus Rift.  In fact, this shop is named Tsukumo VR. Besides VR related products and a showroom, this shop also offers a VR consultation counter in case costumers have any doubt. 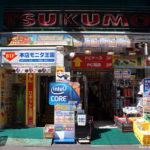 Did you find any information in this entry which was not accurate? Please let us know by using our contact page!